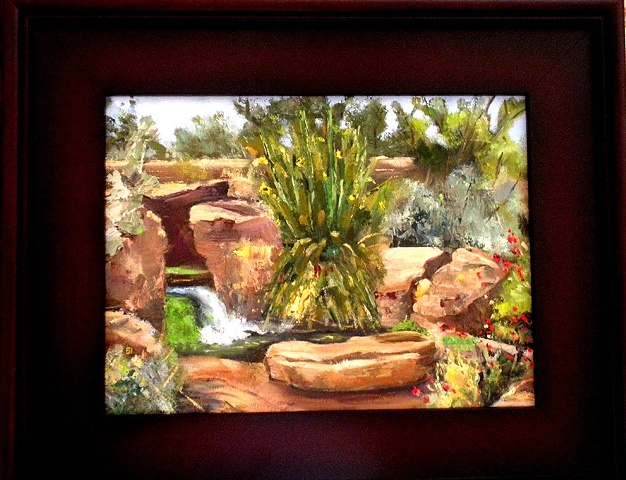 After discovering health challenges had appeared in her life, this painting was created for a dear friend as a reminder of the infinite power of the divine collective consciousness.

A group of kindred souls decided to "meet" at an appointed time daily to offer love and healing energy to our friend through meditation and/or or imagery. Since Tohono Chul in Tucson, Arizona had special meaning for the five of us, this is where we would frequently gather "energetically and spiritually", if not in physical form. The following, then, is a small excerpt from one of our many awesome "sharings". Yesterday's meditation was the 5 of us in a fab glass sided helicopter (we could have floated up but we wanted the helicopter experience). Each of us had the perfect view. We went to the top of the mountain near Canmore where Parks Canada had been doing their avalanche releasing. The scenery was spectacular and there just happened to be an alpine lake where the snow had blown off, making the ice smooth and clear as glass. We had such fun as we always do rollicking and frolicking and spinning and spiralling and pirouetting.

Then, there appeared around the edge of the lake many beautiful grizzly bears who had come out of hibernation to assist us in the healing process. They were happy and watched us with joy. Then we all came together in two circles, ours the inner circle with them surrounding us. Much love and energy was transferred to our friend and to us and all of us to the other. It was quite lovely. Then back to the helicopter, back down to Canmore and off instantaneously to Tohono Chul where we start and end.

Today's meditation found us at our ususal meeting place in Tohono Chul and off we went. To Israel, of all places. We found the wailing wall and observed. Then we were in a synagogue - at least what must have been a synagogue - and the rabbi was quite traditional with the long beard and hair and the head thing. He was very kindly and spoke to our friend, telling her to enjoy herself and that the future would take care of itself. Simple but rather profound words, I thought. There was great love in the environment and a sense of peace. There was more but my mind isn't recalling it at this moment. But the message was there and clear.