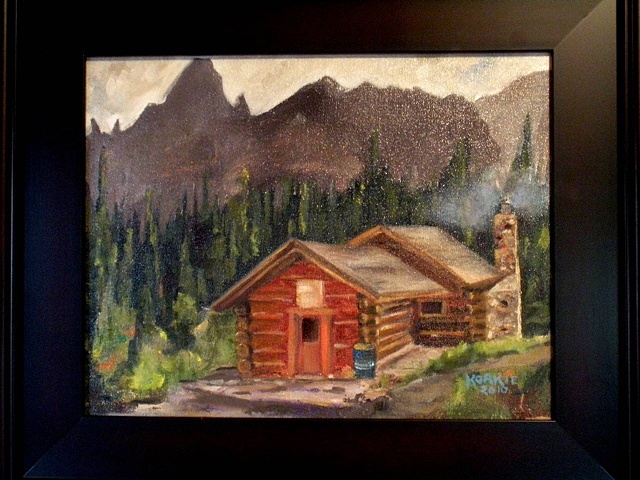 In September 2010, the Canmore Artists and Artisans Guild had the rare privilege of being selected to go to Lake O'Hara in Yoho National Park, BC, Canada. I shall never view this painting again but what I think of that unforgettable weekend complete with a wonderful grizzly bear eating berries at the parking lot where we caught the school-type bus up to the Elizabeth Parker Hut - owned by the Alpine Club of Canada.

Now imagine this. Three full days and nights. No phones. No cell phones or electronic devices of any kind apart from flash lights. No running water. No electricity. Six old fashioned tungsten lights were powered by propane as were the stove and stove burners. The hut was heated with a high efficiency wood burning stove. Water was hauled from the near by stream and boiled. Garbage was hauled by hand each night 2 km to the dumping place. Two outdoor biffies - and BYOassweepay. God they stunk and were not to be emptied by Parks Canada until the mother lode reached 6 inches from the top of the receptacle, so the sign on the door boldy stated. I tried not to look but did in spite of myself and it wasn't a pretty sight. I made sure I used the facility (elevated and accessible exclusively by a 15-step staircase) ONLY twice a day - morning and bedtime!!!

Eighteen of us artists had the main hut, and I think there were about 6 or 8 outsiders in the other, including the custodian and his sturdily built but very attractive twin sister who was a riot!! She also had mammaries that would have made Chesty Morgan weep with envy!!! Kind of reminds me of lyrics in a song: "Can you toss 'em over your shoulder, can you tie 'em in a bow"!! Anyhow, each night we were treated to the most spectacular celestial views on the planet, apart perhaps from the Antarctic and Sahara Desert! Not a single amp of light trespass. Not a single one!! The only signs of possible semi-intelligent life in the entire Orion arm of the Milky Way Galaxy were the satellites zipping across the sky in every direction.

The sleeping arrangements were, well, youth hostel no-star hotel kind of arrangements. And had there been a prize, I would apparently have won the honour of snoring loudest and longest and with the most range of sounds ever heard. We slept side by each on bench-like contraptions that ran the width of the hut, top and bottom - 9 bodies to a "floor". Were it not for the 4 inch foam pieces, the comfort would have been the level of a cold marble morgue table. I, in unique "me first" Verna style, made certain I got one of the three "First Class" window places on the main level. Apparently the penthouse accommodation (which was also the mezzanine level) had the temperature of Hades and the elegance of a crack house.

The first two nights, I dutifully and daintily put on long johns and tee as a facsimile for pyjamas. I took 3 pairs of clean undies and came home with the same, untouched. The last night I didn't even bother to undress and "pulled a Johnathan" (my grandson)and slept in my clothes. The toxic oil paint lingered under my fingernails and my mascara was streaked as I seemed to have missed washing my eyes the last morning. I DID put on lip balm every day although it was colored. My hair made me look like wild woman from Borneo. I see now why so many hikers either have long hair or wear ball caps the whole time. I'll have to ponder that one with regards to myself. And yes, I did floss and brush daily.

By the end of Night 3, we were all quite used to the "tiny bladder contingent" coming and going throughout the night, up and down and down and up the two almost-vertical ladders. They should put all the pee-ers on level 1 and the snore-ers in sound-proofed tents a mile away!! The various rumblings of gas and burps, low sonorous snoring, and the scratching gnawing of the house rodent added to the cacophony of the Gong Show memories!! Not to be forgotten were the screams in the night; first mine, cuz I thought there was a mouse in my hair when my bed mate Ann tousled my hair instead of my shoulder to waken me from snoring, and then hers, from a bad dream. Served her right!!

The communal food each night was extraordinary. Our CAAG president at the time was also a chef at a very famous hotel. He planned the main course menus AND cooked it all with the aid of the KP. It was fanfrickingtastic!!!! Curry the first night with the medallions of chicken done to perfection, rice with the turmeric, pita. Second night was beef tenderloin, all fresh veggies including things like fennel and wonderful spices. The final night was roli poli pasta spirals (not the small ones) with arctic char and tons of veggies. The appies and desserts that people brought were awesome. I took only one bottle of wine so had to ration it. Best communal food I've ever had and better than most restaurants, for that matter. Despite all efforts at immaculate sanitation, I saw a mouse taking his time to traverse the kitchen floor one morning and one of the men heard it rooting around our sleeping room and across our sleeping bags. Thank God I was asleep!!!

All in the group were experienced long-term hikers - except me. I fell into it all by default!! Hence, novice as I was, I lugged a 25 pound back pack up to Lake MacArthur. Which astonished me and still does. Another time, my pack would be no more than 12 pounds. I know I would never have attempted it had I known the degree of difficulty (at least for me). The weather had everything. Sun, cloud, rain, snow, fog. And this painting was rendered over 7 hours the first day. Snow melted on my glass palette and proved once again, that oil and water do not mix!

At some point, one of our group's 22 year old snow-boarder free-spirited son joined us to hike and paint. With Bohemian style bushy shoulder length hair and wild toque, he was a trooper. Of all the songs sung the second night (and there were many), he later said that he knew only one. But he was as fascinated with us as a species as we were with him. I think he was kind of in awe of our camaraderie and how we had all come to this place in our respective lives.

On the final morning, we had to get up early as the next group was coming to take our place. And arrive on time at 9 am they did. You have no idea of the chaos of first finding personal real estate and then packing it all up!!! Some of us caught the first bus out at 9:30 -- and I was amongst them. To get to Lake O'Hara, bty the way, even as a day visitor, one must be on the phone the minute the phones are connected in May - much like Ticket Master. We got in on a lottery draw for overnighters as CAAG is closely allied with the Alpine Club. For me, what would be the cat's meow would be to sleep in either the rustic lodge ($600 per night - I saw wheelchairs and vacant expressions on the faces of some of the patrons) or one of the 13 cottages on the lake which I am sure cost a king's ransom.. Nonetheless, I would love to combine everything as above but sleep with my poopsie in one of the lakeside huts. Nirvana!! One can dream...................