Art > BUGABOO TENS Not For Sale 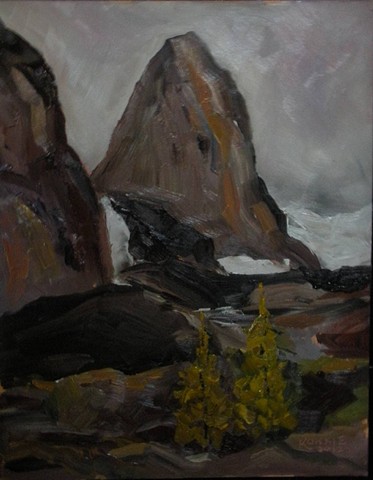 Man, this second afternoon (and morning) was colder than moonlight on a tombstone. Bits of cloud, fog, rain, and the odd "flacon de neige" teased all day. But by late afternoon, the joke was over. It poured! And poured! Tired and cold and a bit wet to boot, we received word that the helicopter couldn't get in to pick us up due to the inclement (understatement) weather.

Now this news caused considerable consternation for some of the group. Tim-Bits' face had turned the colour of grim grey granite, and he was already picking out the ledge that he might have to sleep under till rescue at some point. He was probably even thinking it might become HIS tombstone.

Huddled together under a bit of a rocky outcrop, we were regaled by Liz with the brave story of her new vehicle purchase. Every sordid silly senseless detail of it for almost an hour. Made the time pass, though. A few weak laughs were thrown in here and there as Liz droned on (I'm just testing to see if she has read this) and on.

Finally, the chopper made it in and we were one very happy lot. In the retelling of this story, some apparently think of it not so much as an adventure but rather an ordeal. In fact, one wrote: "There were smiles even when heli pickup was in doubt." Reaalllly????