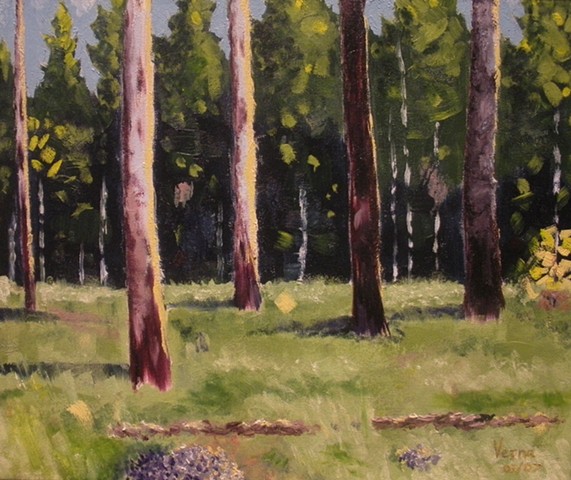 This painting was really the beginning at a Frank Haddock workshop in Spruce Grove, Alberta.

At the end of the day, all of Frank's students had completed a rendering of a stand of trees. All of these "works of beauty" were lined up beside each other on a display ledge where Frank gave feedback to each artist. They all looked pretty much the same, having been painted from the same photo and using the same palette, so I can somewhat understand how the mistake was made. But stilll......So I received a phone call the day after the workshop from the Allied Arts Council saying that someone had gone home with the wrong painting and would I check to make certain that the one I had was, in fact, mine. It was. Apparently the mystery was never solved. I thought that was hilarious. I mean, think about it. Not much hope for that aspiring artist. Or maybe s/he was smarter than the rest of us, choosing the best of the lot for her/himself.